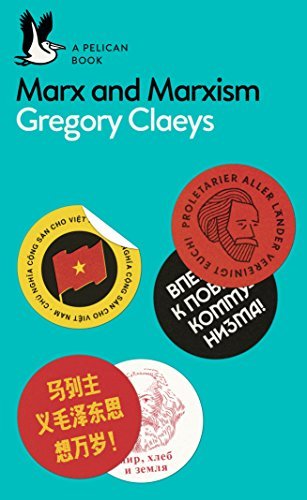 The first half of this book was not great, and it went rapidly downhill after that.

Part one, Marx, is a combination biography and intellectual history. The biography part is mediocre; if you want to read about Marx’s life then probably a dedicated biography is better and more interesting. (e.g., Wheen, Liedman, or Stedman Jones.)

The intellectual history aspect is a little better: tracing the development of Marx’s work over time and its interrelations with other writers. There’s a tiny bit too much insistence on the unoriginality of Marx’s thought, presumably aimed at the potential reader who imagines Marx’s ideas sprang fully-formed out of nowhere. The bigger problem is Claeys’ fixation on Marx’s posthumously-published 1844 notebooks which, throughout this section and the rest of the book, he seems convinced are the most significant of Marx’s works.

Far be it from me to say that an author has the final say in how to interpret their work; certainly value can be found in aspects that Marx himself thought less significant. But I think we can at least learn something from the fact that Marx abandoned these themes after this point; that he never published nor attempted to expand on them elsewhere. So when Claeys laments that Marx doesn’t explain how such-and-such relates to his 1844 ideas about alienation, surely we can assume that the reason is that the older Marx no longer thought in the same way or that the concept was important/useful. He may well have been wrong about that, but the wishful thinking by Claeys is just weird and annoying; he seems to want Marx to have been someone he wasn’t, for better or worse.

The second half, Marxism goes really downhill. Frankly it’s a complete mess; even accounting for the political differences, it’s badly done. The first chapter here deals with the German social democrats. Claeys’ sympathies are clearly with Kautsky and Bernstein, to the point of self-contradiction: he first criticises Luxemburg for opposing democracy (contra Bernstein) yet then, a few pages later, holds her up as a defender of democratic values against Lenin. The German Communist Party is held to blame for the rise of Hitler for refusing to ally itself with the Social Democratic Party; but Luxemburg and Liebknecht “died in an abortive putsch” with no mention of the role of the SDP in this, and its literal, overt alliance with the protofascist Freikorps.

The chapters on the Russian Revolution and USSR are, predictably, even worse, and hardly worth commenting on. What would have improved this section would have been more depth to the intellectual history aspect of this, but there’s barely more than simple assertion that Lenin et al. had deviated from Marxism.

China and Mao get relegated to “Other Marxisms”, of less significance than the Frankfurt School. Fifteen pages on China, three each on Cuba, Vietnam, and the entirety of Africa; one each for Cambodia and Korea. Presumably Claeys just got bored; it seems like the significance of Marxist movements outside of Europe is primarily in the inspiration they may have provided for European student radicalism and not any impact they had in their own right.

The final chapter, “Marxism in the 21st century”, is basically just useless — a long list of problems with Marxism (conflating problems with the theory itself with problems of various implementations — Claeys equivocates on whether Stalinism is actually Marx’s fault or not) followed by what Claeys thinks is still useful from Marx. 1844’s humanism and theory of alienation is in, surplus value is out (several times during the book he’s insisted that nobody finds it useful and/or interesting, without really backing this up). In particular Marxism is alleged to have nothing useful to say about the climate crisis, which would probably surprise the many Marxists who find Marxism useful on ecological matters (e.g., Jason W. Moore, John Bellamy Foster) — we are told that climate crisis is more likely than capitalist crisis, without either evidence or a consideration of the possibility that the two are inextricably linked (are we to believe that capitalism would continue to function perfectly in such circumstances?).

He also provides a list of his suggestions for a left-wing political agenda of the future — primarily consisting of things that would have seemed unambitious for the Labour Party of 2015–19, with little consideration of the possibility that implementing this programme worldwide might provoke some degree of capitalist resistance, and remaining on brand by apparently only addressing or considering the Global North in all of this.

There’s ironically little in the way of consideration of alternative viewpoints on Marx and Marxism; throughout the book it’s taken for granted that what Claeys considers important, interesting, or relevant is what everyone should/does consider so. Althusser is dismissed in a paragraph or two with little engagement beyond noting that “anti-humanism” was an “unfortunate” label. Marxism may not be globally popular, may have been given a bad name by some of its implementors; but there are still people engaging with Marx in good faith, and coming to conclusions different to Claeys, and none of these are even considered worthy of an offhand dismissal.

All in all not worth the 99p I spent on this.