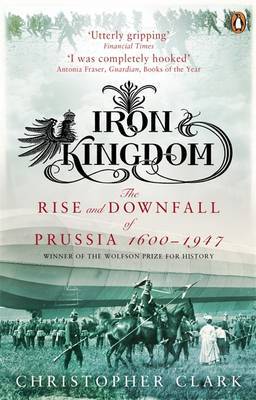 
I enjoyed the later parts of the book more than the earlier; that could partly be because nineteenth and twentieth century history is (currently) what interests me most, but it’s also the author’s own period (judging by his books on Wilhelm II and WW1). Interesting to see the development of a concept of German nationhood and how that intertwined with and contrasted with the idea of Prussianness; how Prussians were seen negatively even by other Germans as late as WW1 (which after all was only a few decades after German unification); how the Nazis also used a particular idea of Prussianness in support of their own ideals, and that although this wasn’t the only conception of what it meant to be Prussian, it was ironically the same negative and militaristic conception that foreign opponents of the Nazis (e.g., Churchill) shared.

The book’s biggest weakness, at least towards the beginning, is possibly its lack of a chronology or family tree. In a dynasty where almost every significant ruler was named Frederick or William or Frederick William, and where regal pretensions led to a restarting of regnal numbers so that there are two Frederick the Seconds, etc., this feels like a necessity. And I say this as a native of a country whose own royal family has an unhealthy relationship with the name George.