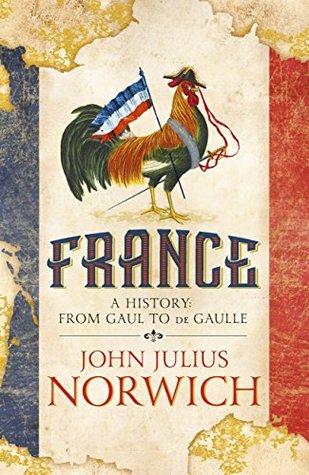 
So, first of all, this book is misattributed. There was no such person as “John Julius Norwich”; he was John Cooper. Norwich was his title; using it as a surname is aristocratic pretentiousness. I mention this not just to be difficult, but because knowing that he’s the Second Viscount Norwich helps to explain some of his perspective, particularly since 1789. (It’s also relevant that his father was Duff Cooper, former cabinet minister and British Ambassador to France — but don’t worry, he won’t let you forget that.)

In general, this is a relatively quick and high-level overview of French history — naturally, it’s difficult to get into much detail when covering 2000 years in 400 pages. And, as is common with history books that cover broad spans of time like this, the earlier centuries are covered much more briefly than later ones: though the book begins before the Roman invasion, 1453 (the end of the Hundred Years’ War) is only about a quarter of the way through; the Revolution of 1789 halfway through; and the Franco-Prussian War in 1870 three-quarters.

His focus is very much on what kings, aristocrats, and Popes did; on battles and on political intrigue. There’s almost nothing of everyday life; decades of historiographical development seems to have passed him by, and he’s teaching what I presume is basically the same sort of history he learned in the 1940s. (Ironic, because it was the French Annales school that was one of the first to emphasise social history rather than the Great-Man history that Cooper writes.) There are almost no women mentioned at all, at least not in their own right: only wives and mistresses, of whom we’re generally only told how attractive and/or nagging they were, and how many children they succeeded in producing for their husband. (Maria Theresa, wife of Louis XIV, is seemingly held to blame for her only son’s early death — at the age of 50.) I think the only woman mentioned for her own achievements might be Edith Piaf.

His political bias is particularly clear in the chapters following the Revolution; he seems to admire Louis-Philippe and Napoleon III, and is particularly critical of the Third Republic. He seems disappointed by the failure to re-establish a monarchy; policies separating the Church and State are “persecution”; on the other hand, he’s thoroughly uncritical of the “spectacular” growth of the French Empire in Africa and South-East Asia, and its mission civilisatrice. The Paris Commune hardly gets mentioned; when it does, it’s presented effectively as a military coup, and the civilian (and socialist) aspects are hardly mentioned at all.

I’ve read worse, but it’s difficult to recommend this much.