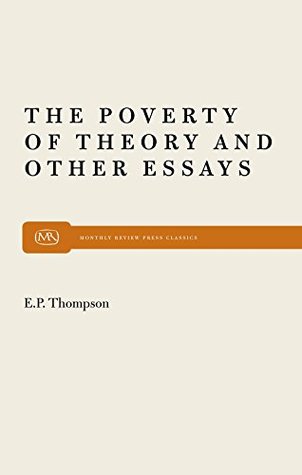 Mainly read this for the titular essay (which takes up half the book on its own) rather than the handful of others that are included.

Seems to line up with Miliband’s critique of Poulantzas in arguing that Althusser’s ‘structures’ are idealism, excessively abstracted from real-world evidence (and indeed Althusser seems to consider this a virtue). Thompson argues that Marxist analysis should be based in the study of history, and a recognition that historical events can only ever follow general trends rather than being expected to slot neatly into predetermined categories. (He illustrates this in another essay, “Peculiarities of the English, by criticising the idea that the English revolution should be measured against the French one as some sort of Platonic ideal of a revolution.)

I find myself sympathising with Thompson’s position, as I did with Miliband, but I’m also wary of doing so, given that I’ve only had a second-hand account of Althusser/Poulantzas’ position; not that there’s necessarily any intentional misrepresentation, but even good faith quotations from a wider body of work don’t really make it easy to follow the thread of the argument. (On the other hand, the selection given from Althusser’s writing here doesn’t exactly inspire me to look more closely.)