Review: David McKittrick and David McVea, Making Sense of the Troubles: A History of the Northern Ireland Conflict (2012) 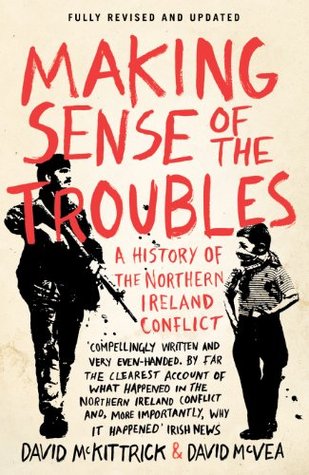 Surprisingly balanced, in that it makes it clear that Catholics had genuine grievances that accumulated during 1921–69, and does not gloss over loyalist crimes, while also not defending republican violence, particularly against civilians. Does seem sympathetic to the idea (apparently introduced by SDLP leader John Hume) that the British position was essentially neutral, not imperialist, which seems hard to reconcile with the fact that Britain itself set up the institutions of Protestant/Unionist control, and both the RUC and the Army were complicit in loyalist violence.

Not the quickest read but also not as dry as some of the other reviewers have suggested — perhaps I’m more tolerant of dryness than others are, though. The last chapter felt a bit unnecessary, since it just seemed to summarise the preceding chapters. There’s also a timeline at the end, but switching back and forth to that on a Kindle is more trouble than it’s worth. (Other issues with the Kindle edition include the fact that the page numbers stop at 230, which looks like when the first edition ended, and there’s an occasional wrongly-encoded character in those final couple of chapters, too.)