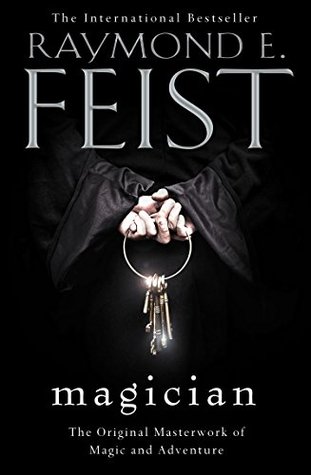 Just goes on and on. Starts off seeming like it’ll be the story of how an orphan kid becomes a powerful magician (and okay, that’s a cliche but who cares). In fact, most of the interesting parts of that story happen off-camera; most of the book is taken up by the politics of two countries and the war between them. That’s not necessarily a bad thing, but in this case I just found it dull — after introducing some characters who aren’t the most original but at least have potential for being interesting, they’re basically ignored for huge chunks of the book in favour of even less interesting characters, and when the story occasionally returns to the original characters they’re basically unrecognisable.

Part of the problem is that there’s no character development. The characters do change, but mostly off-camera, and any time there’s a chance for a particular plot line to develop, something happens to shift attention elsewhere, or big chunks are just skipped willy-nilly. The most irritating of these is Pug himself; his potential is noticed by a wizard who whisks him off for training; after an intervening chapter with the other characters, we return to Pug, who’s already about to pass to the next stage of his training; once the test is passed, we skip over the remainder of his training in a couple of sentences and go straight to his final test, and by the end of the chapter it’s complete. So in the space of two chapters he’s gone from barely-trained apprentice to one of the most powerful wizards in the world — in a book that’s supposedly about him and his journey to become that.

Needless to say (since this is a fantasy novel with a male author written in the 70s and 80s) women hardly get a mention; they mostly exist to be love interests or at least to gaze admiringly at the male characters. There are some vague hints that the author is trying to do better than this (e.g., mentions of Carline becoming a capable leader in her own right) but this happens entirely in the background, mentioned just once or twice and then abandoned; when the character returns to the main action again, it’s mostly to form a pointless rivalry with another woman based on jealousy over a man. Basically the female characters are even more one-dimensional than the males, although it’s easier to tell them apart because there are fewer of them.