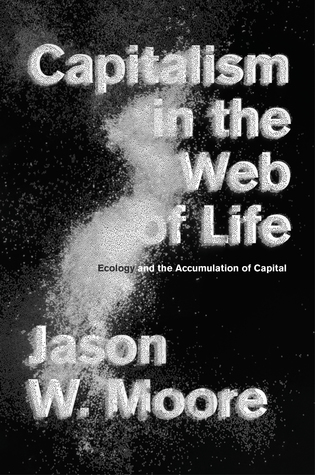 Jason W. Moore, Capitalism in the Web of Life: Ecology and the Accumulation of Capital (Verso, 2015). 336pp.


I’d like to give this a higher rating but too much of it went over my head. What I understood was interesting, but a lot of it felt quite dry and academic, with unexplained jargon — “Four Cheaps” and “Cheap” (always capitalised) was dropped in regularly, which only made sense because I was already aware of A History of the World in Seven Cheap Things;Raj Patel and Jason W. Moore, A history of the world in seven cheap things: a guide to capitalism, nature, and the future of the planet (Verso, 2018).

“technics” was regularly used (almost always italicised) and even after going back to look it up I didn’t really understand what it referred to; and there were occasional references to the “first” or “second” sixteenth or nineteenth centuries, each time having to explain in parentheses what time period was actually being referred to, making the jargon term superfluous.

What I did manage to learn from the book boils down mainly to two things: firstly, that discussions of capitalism and ecology tend to separate the environment from society, even when they pay lip service to the fact that humanity is part of nature; conversely, also, that society is inescapably shaped by nature and therefore the two cannot be meaningfully separated. Secondly was the useful (to me) insight that the role of nature within capitalism is analogous to the role of women, for example; i.e., that nature provides unpaid ‘work’ that capitalism depends on to continue to profit and expand, in the same way as it depends on the unpaid work of women (in particular) in order to produce new workers; in both cases the work is vital but treated as invisible/free, in ways that would have to be paid for if done ‘within’ capitalism.

One further point is that the book seems a little disjointed, and I wondered if it was at least partly put together from other works; the first chapters seem to dive right into the deep end conceptually, then chapter 7 (of 10) seems to reiterate a lot of the basic points (which I actually found helpful, since I’d been pretty lost in the first half of the book). That chapter, by the way, is on ‘Anthropocene or Capitalocene’, making an argument against a term that flattens humanity into a single indistinguished mass and posits the entire species as the problem, rather than the particular social arrangements of capitalism. It’s also the title of an edited volume by Moore, and an argument that is worth investigating further, even if I don’t know whether this is the best introduction to it.

All in all, you might get more from this book if you’re more familiar with some of the concepts than I am; in my case I’m intending to read Seven Cheap Things soon, which I understand makes the same arguments targeted more towards a lay audience.