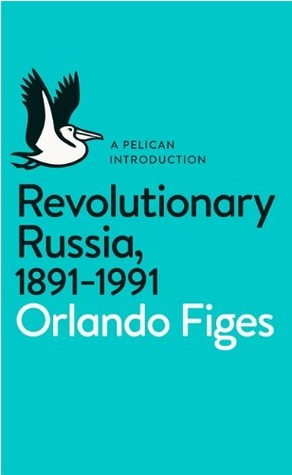 Based on a review originally posted on Goodreads.

It’s difficult to find a history of the Soviet Union that doesn’t have an ideological axe to grind. Unfortunately, Figes’ book does not escape this flaw.

The first issue to be noted with this book is its premise. Figes argues in the introduction that the entire Soviet period must be understood as a whole in order to understand the revolution fully. A laudable goal, and indeed the criticisms of periodization he lays out in the introduction are valid ones (where should a history of the revolution end? ’21? ’24? ’27? ’36? ’53?), his commitment to this premise doesn’t seem to extend past the introduction itself. Stalin’s death occurs at the end of Chapter 16; the breakup of the Soviet Union is covered in chapter 19. 38 years of history are covered in just 44 pages; the preceding 62 years had 244. One might almost wonder whether, if the post-Stalin decades warrant so little space in the book, were they really seem so vital to an understanding of the revolution?

Indeed, it seems as if what Figes really wanted to do was not study Khrushchëv, Brezhnev, Andropov, and Chernenko, or even Gorbachëv, but simply to tack on the final chapter, a rather moralistic and handwringing look at the legacy of the USSR, mostly in terms of what Figes thinks should have happened but didn’t (e.g., human rights trials, a “truth and reconciliation commission”), and the “disturbing” observation that most Russians don’t think negatively of Communism.

This is, however, quite in fitting with the rest of the book. Figes’ ideological bias is clear throughout, holding the USSR to outrageous double standards. For example, he complains that the USSR hadn’t joined the League of Nations, preferring to act alone; a few pages later, he complains that it joins the League of Nations, in the face of the threat of fascism. He notes that the Western powers were unwilling to ally themselves with the USSR against Germany during the ’30s (indeed, for all intents and purposes Britain and the USA found themselves on the same side as Germany in the Spanish Civil War); he further notes that the USSR was not in a position to fight Germany alone. Yet, then, he goes on to criticize Stalin for signing a nonaggression treaty with Germany, laying the blame for World War 2 not on Hitler, or on the Western democracies intent on appeasing Hitler, but (explicitly) on Stalin.

Fundamentally, he (like Michael Burleigh) is incapable of seeing even a possibility of good faith from anyone on the left. Socialists are, prima facie, only after power, for its own sake, and any claims to act in anyone’s interests but their own are necessarily lies; anybody who supported them was just too gullible to see the truth. Indeed, Burleigh, for all his flaws, is perhaps more generous in recognizing the successes of socialist groups in improving conditions for ordinary people, while still assuming bad-faith reasons for doing so. Figes seems outright unaware, or willfully ignorant, of any improvement in living standards between 1917 and 1991.

He also has a habit of using statistics without context, particularly in relation to the gulags and “great terror”; large numbers sound impressive but without setting them in proper relation they’re mere sensationalism. For example, he quotes the gulag population in the 1930s as being around a million, without noting that, as a percentage of the total population, this is significantly lower than the liberal, democratic, “land of the free” United States even in the 2010s.

Read Robert Service instead, in particular for a more detailed examination of the USSR after Stalin; though not without his flaws, Service still manages a more balanced view. Better yet, for books focussing more specifically on the Revolution (without the self-serving insistence that it continued until 1991) read Sheila Fitzpatrick or E. H. Carr.