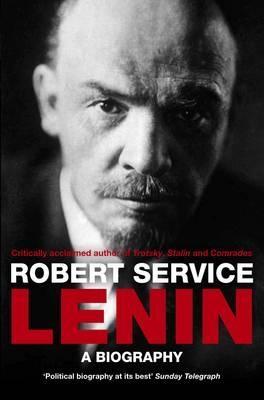 A few reviews of this that I’ve seen have talked about how unbiased this biography is. That’s nonsense. Actually, I don’t think that being “unbiased” is even possible, and certainly not necessarily desirable, as long as authors — and readers — are honest about their biases. Service doesn’t seem to make much of an attempt to hide his bias; indeed, at some points he openly expresses his antipathy towards Lenin and towards socialism in general, so it’s difficult to support a claim of neutrality here. Unfortunately, his bias does have a negative effect on the book as a whole, leading him to make some very odd and unsupportable claims about Lenin’s personality and psychological state, for example.

Service does make a point of dismissing the most excessive exaggerations made about Lenin on both sides (although as the book goes on he’s more interested in dismissing the positive exaggerations than the negatives). However, he falls into the same trap right from the beginning, suggesting for example that Lenin was somehow innately malicious as a child — we are expected, it seems, to believe that there was a direct connection between his breaking of a toy horse as a seven-year-old and his establishment of a “totalitarian” state forty years later.

Service appears to have had a specific idea about who Lenin was (or, at least, how he wanted to portray Lenin) from the outset. Then, throughout the book, any evidence that contradicts this idea is presented as a “contradiction”, but never seems to challenge Service’s basic assumption. So, for example, the fact that state employees and civilians didn’t show excessive deference towards Lenin compared to any other individual is evidence, for Service, of Lenin’s failings as a dictator, without ever considering the possibility that a wrong assumption has been made about the nature of the Soviet state. Similarly, any time Lenin seems to have changed his opinion is interpreted as being scheming, manipulative, power-hungry — the possibility that his opinions genuinely changed doesn’t ever seem to occur to Service.

Service is also prone to speculating about Lenin’s mental state, while acknowledging that he has absolutely no basis for such speculations. One example: after the uprising of Socialist-Revolutionaries in the Volga region, Lenin was angry. Was this due to a desire for power and dislike of being challenged? This would have fit in with with the portrayal of Lenin that Service had spent hundreds of pages building up. But no, instead it’s necessary to speculate that perhaps it was due to bad memories of his family’s treatment by the people of that region (actually, of one city in that region) thirty years ago. This kind of thing goes right through the book and really should have been left out.